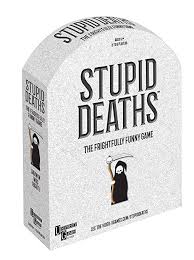 Over the past few years me and my partner MaFt have discovered a love of board games. We have quite a variety ranging from popular games with every household like Risk and Monopoly to less well known games like Splendor and Pandemic. The only problem we have is finding games which are interesting and fun to play with just two players. I am also a big fan of the CBBC show Horrible Histories, especially the stupid death sketches with Simon Farnaby as death.

So when I saw that University Games had brought out a game called Stupid Deaths that it stated on the box was for 2-6 players, I thought this would be a good game to add to our collection, especially as it was less than £20. Unfortunately I was wrong as with many games, we soon discovered that it simply doesn’t work with two players. 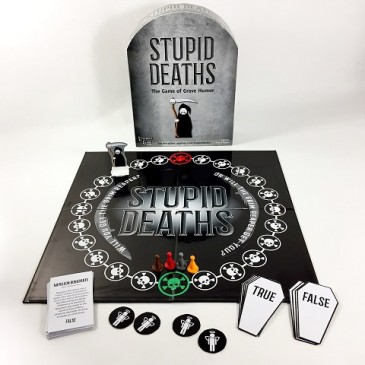 The cards are quite flimsy and are not of very good quality, I feel like after a few plays they could start to bend and crease very easily. The Grim Reaper is also made of cardboard so if you take him out of the stand each time you pack the game away it also could break quite easily, so it is probably best that you leave him in the stand. The pawns are well made from wood and should last for quite a while.

University Games really haven’t thought about how to make the game interesting for two players, and as such they haven’t adapted the rules or the game mechanics. Death has no chance of catching up with either player once, so that part of the game is pointless and means that there is simply no replay value for two players. Whilst it is possible to make up your own rules to create a more entertaining two player variant it is really not fair to have to do that when it states on the box that it is for two plus players.

Some of our suggestions for making Stupid Deaths give a better two player experience are:Start Death closer to your own start point, or move your own *Start point closer to Death.
*Move a space backwards for incorrect answers, whilst the reader still moves one space forward.
*Move Death forward two places for each incorrect answer.

When I first play a new game I am usually excited for the second play when I understand the game more, however this time I wasn’t and to be honest I haven’t even wanted to play it again at all.