Power Rippers from Jakks Pacific are a fun fusion of Vehicles, Battle Tops, & Action Figures in 1! Rev ‘em up & Rip it Up! They can Race up to 500 Scale MPH, Battle, and do Insane Stunts, Jumping up to 10 Feet High!  Each Ripper Transforms and is armed with either Teeth, Stingers, Battering Ram or Saw Blades! There are 16 characters to collect in wave 1! 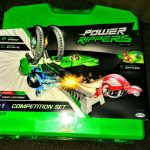 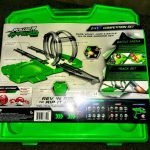 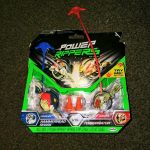 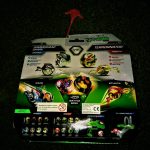 We were sent the Power Rippers 2 in 1 Competition set along with a Power Rippers 2-pack to try out, JR loves both car tracks and ripcord toys so we thought this would be a great combination. It appealed to me because it brought back memories of when my nephew was small and he had a large collection of both Bakugan and Beyblades.  We excitedly opened the Competition box first but were disappointed to discover that although it’s an arena and track with which to race your friends and family it only came with one of the Power Rippers, which is something to bear in mind if you are buying this for Christmas, you will need to purchase at least an extra Power Rippers single pack to be able to use the set to it’s full potential.

We had a lot of fun playing with it although TP and JR really struggled to get enough power on the rippers to make them go the full length of the track, also had trouble with getting enough spin to battle, having said that about 4 or 5 days in to playing it every night after school they both got the hang of it.

I think that power rippers would make a great addition to the presents under any child’s tree this Christmas.