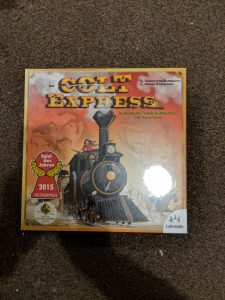 In Colt Express, you play a bandit robbing a train at the same time as other bandits, and your goal is to become the richest outlaw of the Old West. The game consists of five rounds, and each round has two phases:

The game takes place in a 3D train in which the bandits can move from one car to another, run on the roof, punch the other bandits, shoot them, rob the passengers, or draw the Marshal out of position. The train has as many cars as the number of players, and each car is seeded with gems, bags of loot or suitcases at the start of play. 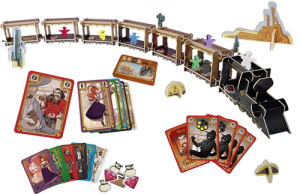 Each player starts the round with six cards in hand, with each card showing one of these actions. At the start of a round, a round card is revealed, showing how many cards will be played; whether they’ll be played face up or face down, or individually or in pairs; and what action will occur at the end of the round (e.g., all bandits on top of the train move to the engine). You can pick up loot, gems or suitcases only by playing a “steal” card when you’re in a train car that holds one of these items — but since everyone is planning to get these goods, you’ll need to move, punch and shoot to get others out of your way. You can punch someone only in the same car as you, and when you do, the other bandit drops one of the goods he’s collected and is knocked into an adjacent car. 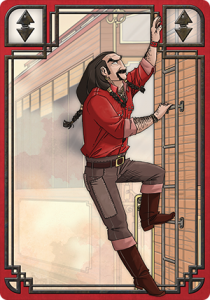 Each player’s character has a special power, such as starting the round with an extra card, playing your first card face down, or pocketing a bag of loot when you punch someone instead of letting it hit the ground.

You can shoot someone in an adjacent car or (if you’re running on top of the train) anyone in sight, and when you do, you give that player one of your six bullet cards; that card gets shuffled in the opponent’s deck, possibly giving her a dead card in hand on a future turn and forcing her to draw instead of playing something. If the Marshal ends up in the same car as you, likely due to other bandits luring him through the train, he’ll be happy to give you a bullet, too.

At the end of the game, whoever fired the most bullets receives a $1,000 braggart bonus, and whoever bagged the richest haul wins.

Colt Express is very much like a game of chess where you have too second guess what the other players are likely to do and which each round having varying amounts of actions and consequences that need to be resolved no two games are ever the same. 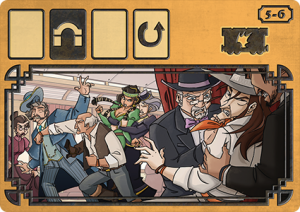 The rules of the game are the same regardless of how many players there are, however, there are different decks of round cards some for 2-4 players and some for 5-6 this is indicated in the top right corner of the round card. The only difference is that the round cards for 5-6 players have fewer action cards that need to be played this is too keep the game at around a 30-40 minute play time.

The rulebook shows a way to play for your first few times of playing where you ignore players special powers and the consequences on the round cards so you can get used to the gameplay, but if you are a gamer which likes these types of card games then you’ll be fine to play the more advanced game straight away, I also found that whilst the instructions are clear and concise this is one of the games where playing it though is better than sitting and reading the book to understand it. The artwork is brilliant and they’ve even taken into account that the box needs to close once the train built.